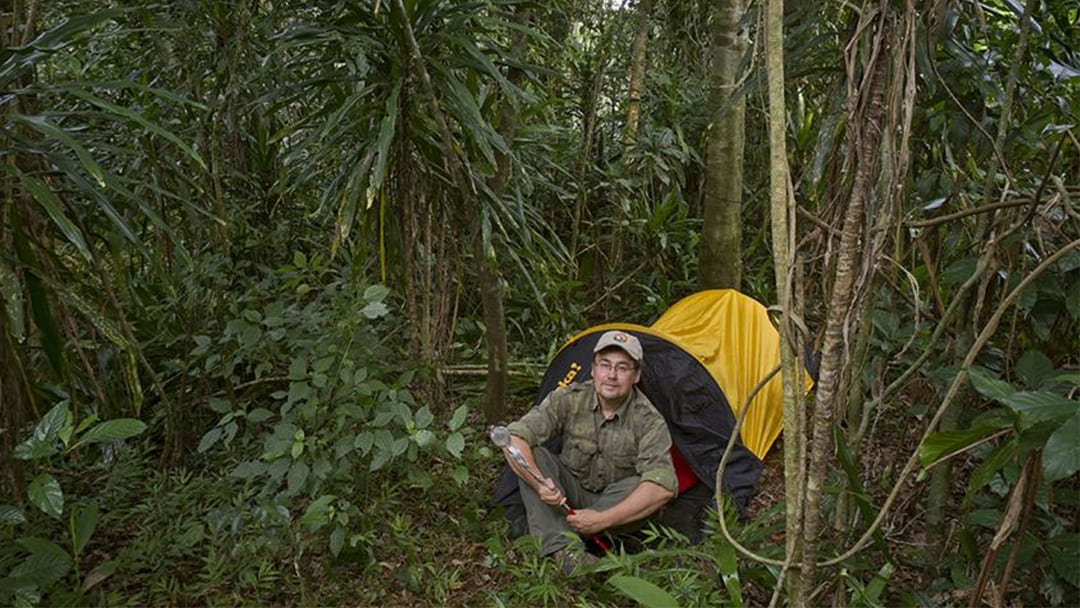 A new study titled “Katydids (Orthoptera: Tettigoniidae) of Gorongosa National Park and Central Mozambique” by Piotr Naskrecki and Ricardo Guta, was published in the journal Zootaxa.
The paper is the result of 6 years of fieldwork in Gorongosa and Central Mozambique by Dr. Piotr Naskrecki and his Mozambican scientific partner Ricardo Guta, a former Gorongosa technician, now working towards his “licenciatura” in entomology. The data were collected mostly during annual biodiversity surveys conducted by the E.O. Wilson Biodiversity Laboratory.
The paper describes the biology, distribution, and acoustic behavior (songs produced by these insects) of all 60 species living in the region. It also describes 9 new to science species discovered in Gorongosa; two of these species belong to entirely new genera.
Twenty-four species are also recorded for the first time in Mozambique. At least two of the newly discovered species are endemic to Gorongosa (they can be found nowhere else in the world) and they occur in the unique rainforest of Mt. Gorongosa. One of the other new species, Enyaliopsis iaculator, has an unusual defensive behavior of shooting its own blood at the attackers.
The new species are as follows:
Gorongosa carri – Placed in a new genus named after the park, this species is described in honor of Mr. Gregory Carr whose dedication to restoration, conservation, and human development in Mozambique has made Gorongosa National Park one of the greatest conservation success stories on the African continent.
Afroagraecia muagurai – Named in honor of Mr. Pedro Estêvão Muagura, the warden of Gorongosa National Park, in recognition for his significant contributions to nature conservation in Mozambique.
Ovonotus abreuae – Named in honor of Ms. Alcinda António de Abreu, former Minister of the Environment in Mozambique, whose support was instrumental in including Mt. Gorongosa into Gorongosa National Park.
Enyaliopsis iaculator – The specific epithet of this species, iaculator (“shooter in Latin), refers to the defensive behavior of this species, during which the insects spray the attacker with a jet of their own hemolymph (blood).
Eulioptera mutembai – Named in honor of Mr. Mateus Mutemba, Director General of the National Administration of Conservation Areas of Mozambique and former warden of Gorongosa National Park for his many contributions to biodiversity conservation.
Eulioptera carolli – Named in honor of Dr. Sean B. Carroll, an eminent evolutionary biologist and an ardent supporter of the Gorongosa Restoration Project.
Parapyrrhicia guytonae – Named in honor of Dr. Jennifer Guyton, a conservation biologist, an accomplished photographer, and the collector of some of the specimens of the new species.
Eurycorypha stalmansi – Named in honor of ecologist Dr. Marc Stalmans for his numerous and significant contributions to research and conservation in Gorongosa National Park.
Eurycorypha parkeri – Named in honor of Mr. Christopher M. Parker, a dedicated supporter of conservation