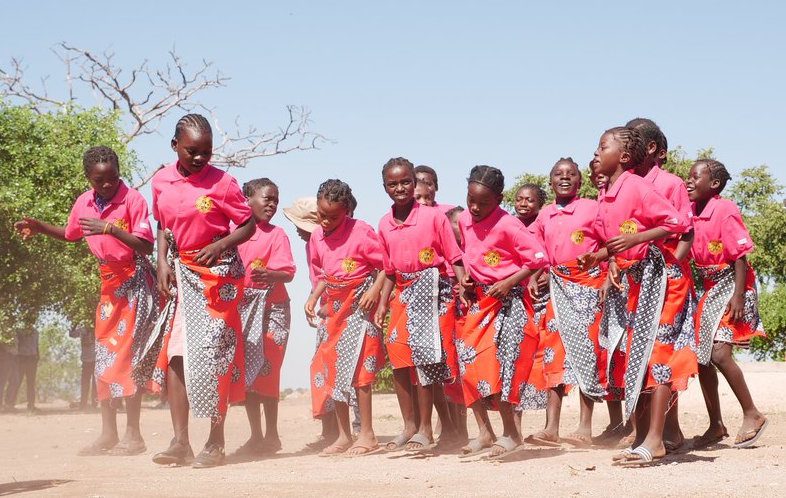 Top photo – Young girls dance outside a school paid for by Gorongosa National Park. The school is located in the Sustainable Development Zone surrounding the park in Sofala province, Mozambique. May 24, 2022, Thomson Reuters Foundation/Kim Harrisberg

I had heard the name “Gorongosa” mentioned in conservation circles before I really had an understanding of how this unique national park worked. When I was contacted by Earth Ranger, one of the park’s partners who use satellite services integrated through their software to track collars placed on at-risk species, my curiosity was piqued.

There are countless examples of failed conservation efforts in Africa and around the world – efforts where animals were put before people, where communities were seen as threats, rather than part of the solution. After a few email exchanges I was on a flight to Beira to spend time trying to understand how and why Gorongosa was labelled such a success story. I had a week to report – a generous amount of time in an industry where deadlines are constantly being chased and multiple stories are being written at once. After one week, I felt I could have stayed for a few more. The place was a journalism dream: each employee, researcher and community member had endless stories that each could have been turned into a book, let alone an article.

I spent time with scientists, rangers, academics, veterinarians, students, farmers and teachers. I soon realised that Gorongosa was a continuously evolving experiment that aimed to merge protecting nature with empowering people. Of course there have been mistakes and challenges along the way, but these were spoken about openly to show they had become lessons on how to do more, and to do better.

My article focused on the use of technology, trees and people to reverse nature losses, such as those triggered by Cyclone Idai. I wanted to portray what I had learned from the experts during my week at Gorongosa: there is no silver bullet, it takes myriad solutions working together if the devastation of climate change is to be tackled. Among the many powerful anecdotes was the fact that the greenery in Gorongosa managed to soak up some 800,000 Olympic-size swimming pools of water during Idai’s deluge, preventing further damage and loss of life for surrounding areas. The devastation was still tragic, but it could have been so much worse.

As the world faces heatwaves, wildfires, droughts and floods, Gorongosa gives many hope that conservation can and will have a huge role to play in how we navigate an undoubtedly turbulent future, and that this cannot be done without putting local people first to lead these life-saving efforts.