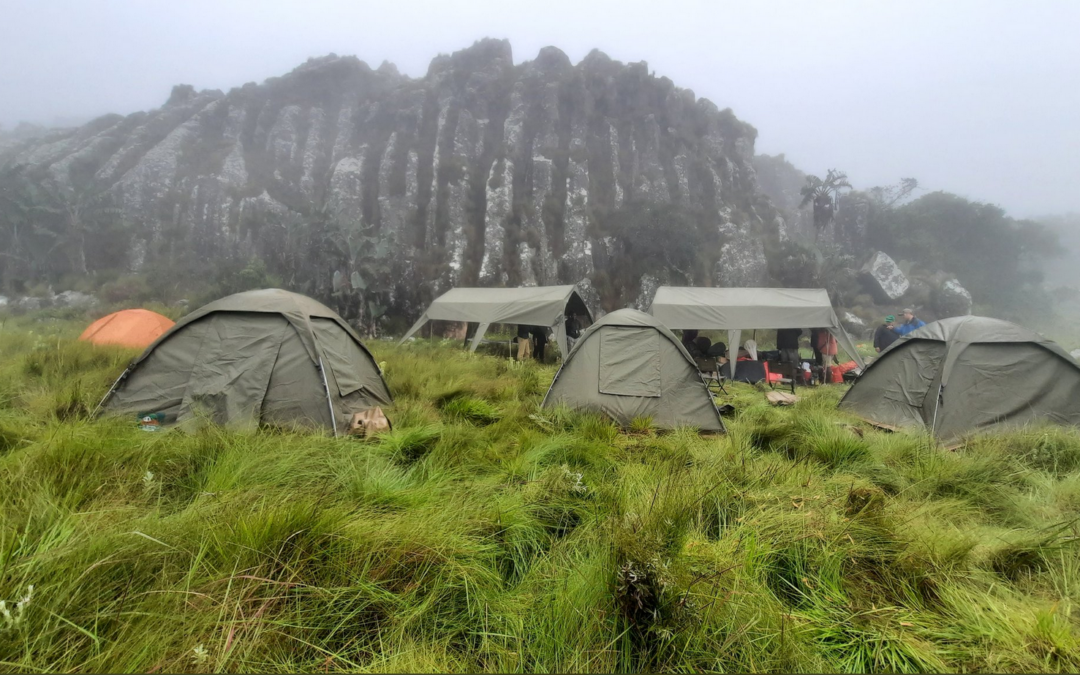 A team of Gorongosa scientists returned from an early May expedition to Mount Gorongosa with host of new data and wildlife findings.

The expedition was crucial to accessing the state of its biodiversity. Dr. Piotr Naskrecki, expedition leader and associate director of the E.O. Wilson Laboratory, said Mount Gorongosa is unique in many different ways, especially with the presence of several endemic species and subspecies of vertebrates.

“We found a surprisingly high number of shrews and rodents, including two species potentially new to science,” said Naskrecki.

Mount Gorongosa – elevation 1864 meters (6,112 feet) – contains the southernmost extent of a tropical Afromontane forest, which is critically important for the hydrology of the entire National Park. Afromontane forests generally occur in well-watered areas, including ravines and south-facing slopes.

On the submontane meadows of the mountain’s plateau, the Eastern Miombo Sunbird (Cinnyris manoensis amicorum – above left) is a common and loud inhabitant, while the remaining patches of the rain forest shelter a population of the beautiful Gorongosa Green-headed Oriole (Oriolus chlorocephalus speculifer, above right).

“In addition to these gorgeous animals, our Gorongosa science team identified a couple of bird species not recorded in the park before,” Naskrecki said. “Now we need to make sure both of these species, and the rest of their incredible ecosystem, survives”.

Naskrecki also recorded the katydid, Ovonotus aubreae, an endemic species.  He found the katydid paused on a rare plant, Streptocarpus brachynema, yet another species endemic to the mountain.

Gorongosa’s smallest grasshopper also happens to be a species new to science. The team of scientists found a 5 mm-long Usambilla sp. n. on top of Mt. Gorongosa. Unable to fly and so far found only on the submontane meadows of the mountain, this little jewel is likely a strict endemic of the park. It is a member of the family Lentulidae, completely wingless and easily confused with nymphal stages of other grasshoppers. In fact, the entire family appears to be neotenous i.e., consisting of species that retain juvenile characteristics into adulthood.

Merlyn Nomsa Nkomo, a Zimbabwean ornithologist, was also part if the 11-member team.

“It was a great honor to be on this groundbreaking tour which is pivotal to the future of (Mount) Gorongosa,” she said. ”We were living in the clouds and experiencing all the moody weather that comes with it.”.

Nkomo believes that until recently, political instability made it difficult to access and protect Mount Gorongosa. People fleeing armed conflict took refuge on the mountain, harvesting its natural resources and clearing forests for maize farming.