For the first time in the history of Mozambique, a group of 12 young people from different parts of the country attended the first master’s degree in Conservation Biology held entirely within a National Park and gave rise to the film “Young Scientists of Gorongosa” that will be broadcast on RTP Africa on the 6th of February, at 14:15 in Portugal, 16:15 in Mozambique.

This master’s degree takes place within the facilities of Gorongosa National Park (located in Sofala province), a fact that makes it different from all courses held in the country, because, inside the Park, students have the opportunity to reconcile learning theoretical and practical, as well as the opportunity to interact and exchange experiences with several nationally and internationally renowned scientists and researchers. 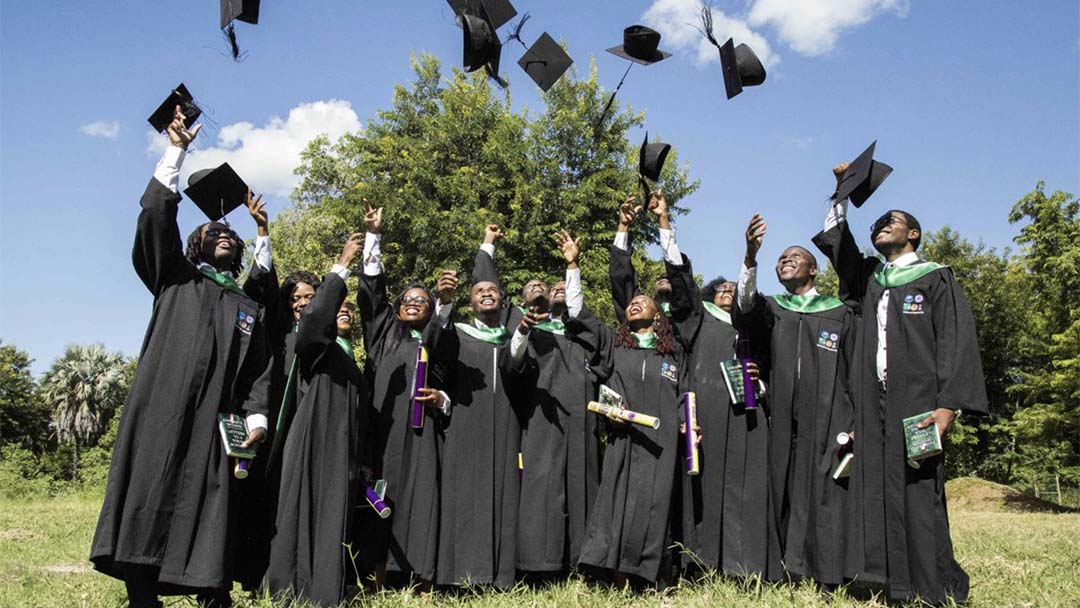 Photo of the new Masters in Conservation Biology

During the 2 years of the master’s degree, the 12 young students are based full time in Gorongosa National Park. in the first year students have theoretical and practical classes, and in the second year they are completely focused on carrying out their research in order to guarantee the completion of the course and the achievement of the master’s degree.

“Young Scientists of Gorongosa”, a 45-minute feature film, shows the journey that the 12 students go from the first day of classes until the moment of their graduation, being their main focus on the research that students have done in different areas of conservation.

With very diverse themes that reflect the current concerns of conservation areas, young scientists (students) have allocated their efforts to contribute scientifically in areas ranging from the habitat of a fish that has existed for more than 400 million years and that has the ability to breathe oxygen out of water, the molecular characteristics that make the miombo woodland resistant to fire, the effects of burning and herbivores on the growth and production of chemical defenses in miombo species, the importance of savannas in carbon sequestration, invasive plant species, the effect of locusts on vegetation, different types of macro fungi, the composition of honey produced in the Gorongosa region, the sex ratio in adults and the age structure of antelopes, the ecological niche of civet and genet , two nocturnal species, the importance of coffee for the reforestation of the Serra da Gorongosa, and the relationship between traditional knowledge and conservation of the biodiversity.

In addition to the methodologies and objectives of their research, these young scientists talk about their passion for science, what they expect from the future in terms of science and conservation, and how it has been the experience of living within an area conservation.

After 2 years of intensive classes and hard work in the field, the 12 students were able to successfully complete the master’s degree in Conservation Biology, and because it is a master’s degree that is being carried out within a conservation area, the graduation ceremony was attended by two ministers, the Minister of Higher Technical and Professional Education, and the Minister of Land and Environment. The ceremony was also attended by the General Director of Conservation Areas, and all attendees highlighted the importance of this master’s degree for the country, since it aims to enhance national conservation frameworks. The film was made over the two years of the masters by Mozambican cinematographer Augusto Bila, from Maputo. “Ago” joined Gorongosa’s communication team as an intern 3 years ago and has become a talented filmmaker. 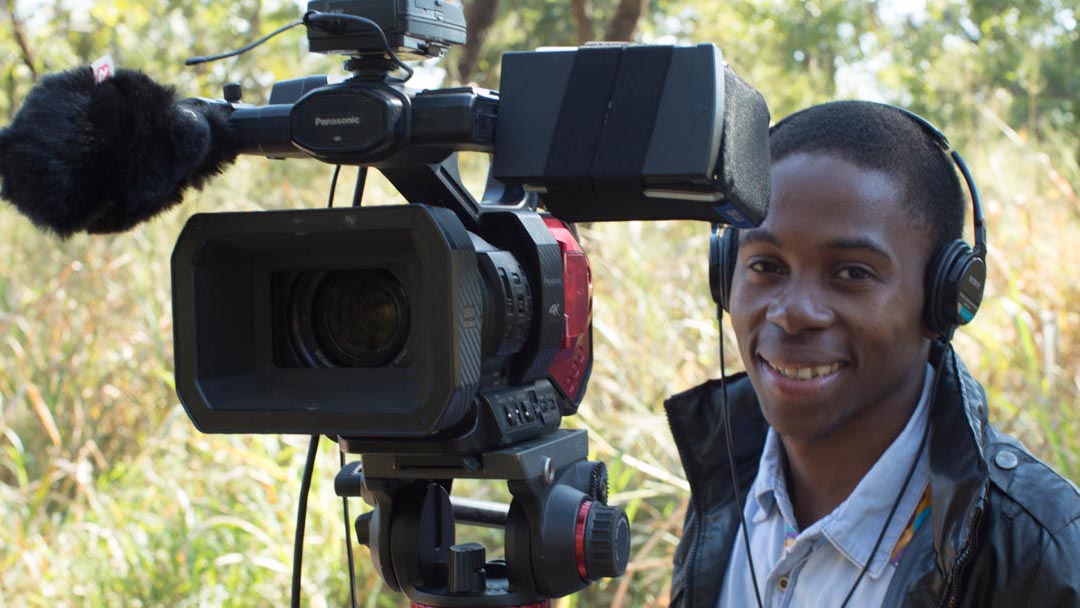 “Young Scientists of Gorongosa” will air on February 6th at 14:15 in Portugal, 16:15 in Mozambique, on RTP Africa and you can also watch it here.

The Master’s degree takes place within the facilities of Gorongosa National Park and it was made possible thanks to the merger of three national university institutions, and an international institution, namely: Zambezi University, Lúrio University, the Instituto Superior Politécnico de Manica and the University of Lisbon, and is generously funded by the Howard Hughes Medical Institute of the United States of America. 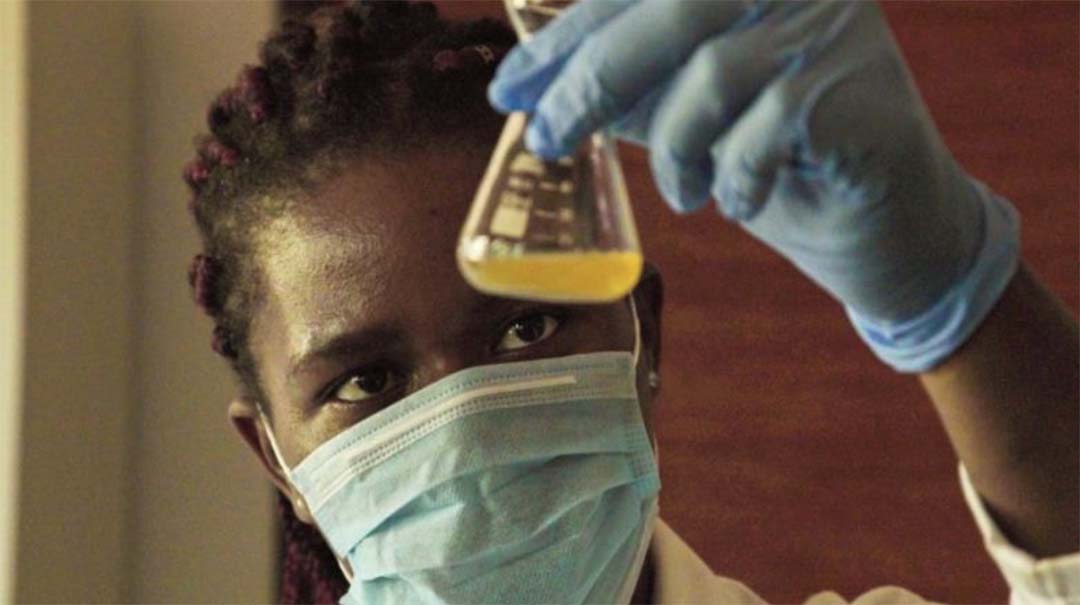 Adija Wilssone in the laboratory analyzing the honey that is produced in the communities
around Gorongosa National Park.

Raimundo José in the field setting up a remote camera to capture the movements of civets and genets. 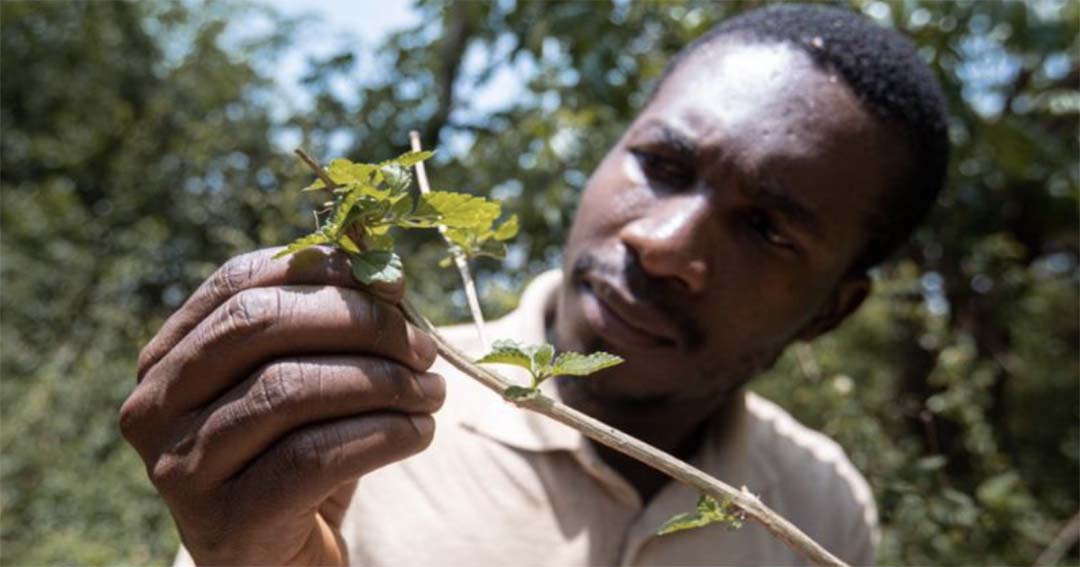 Semo Mogeia in the field looking for insects in Lantana camara (an invasive species). 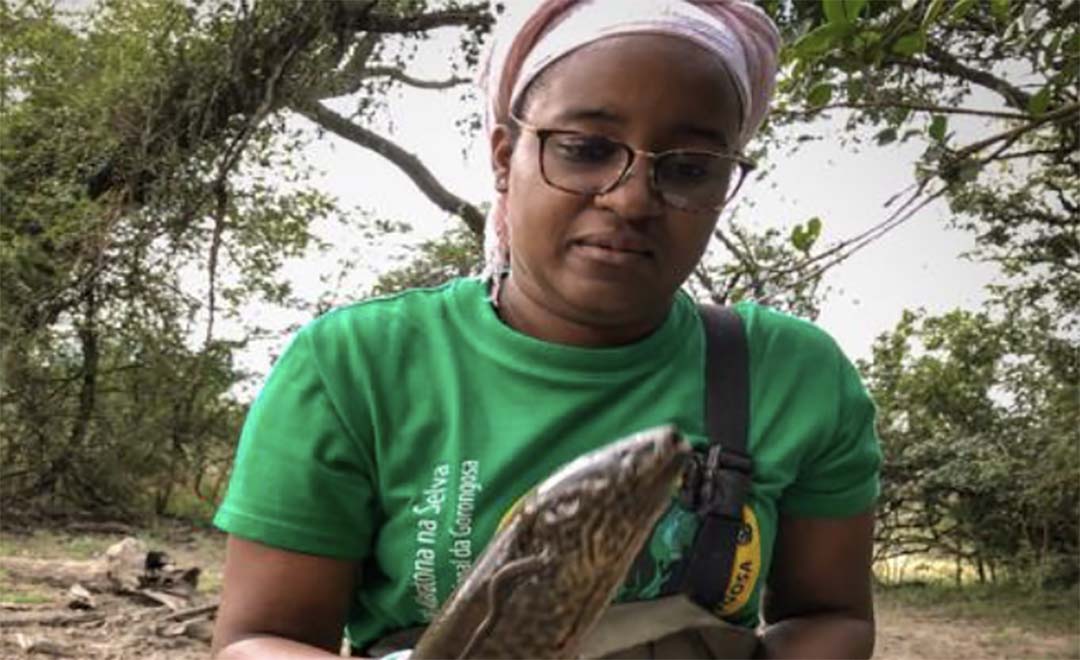 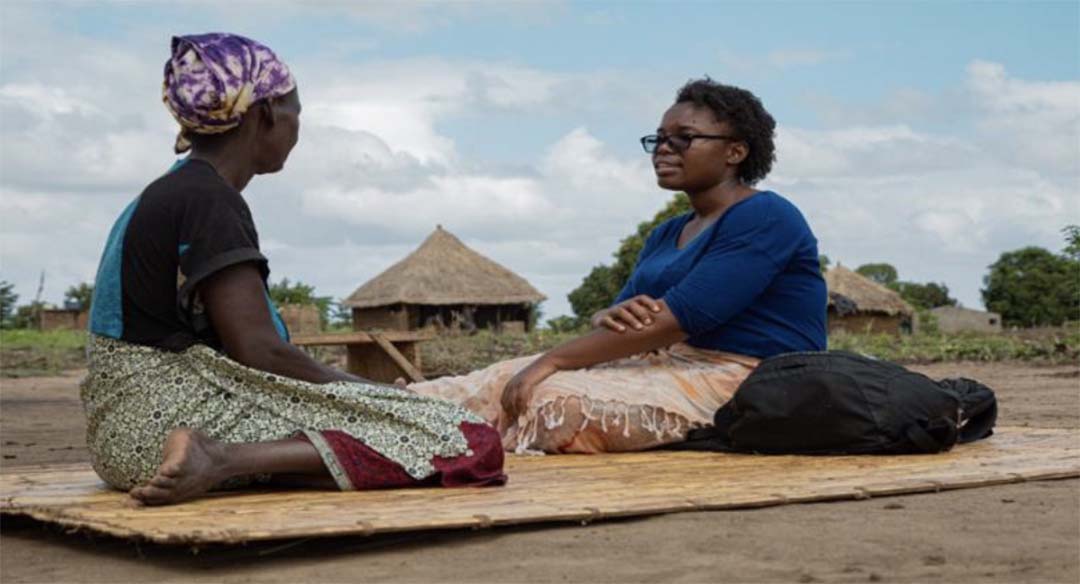 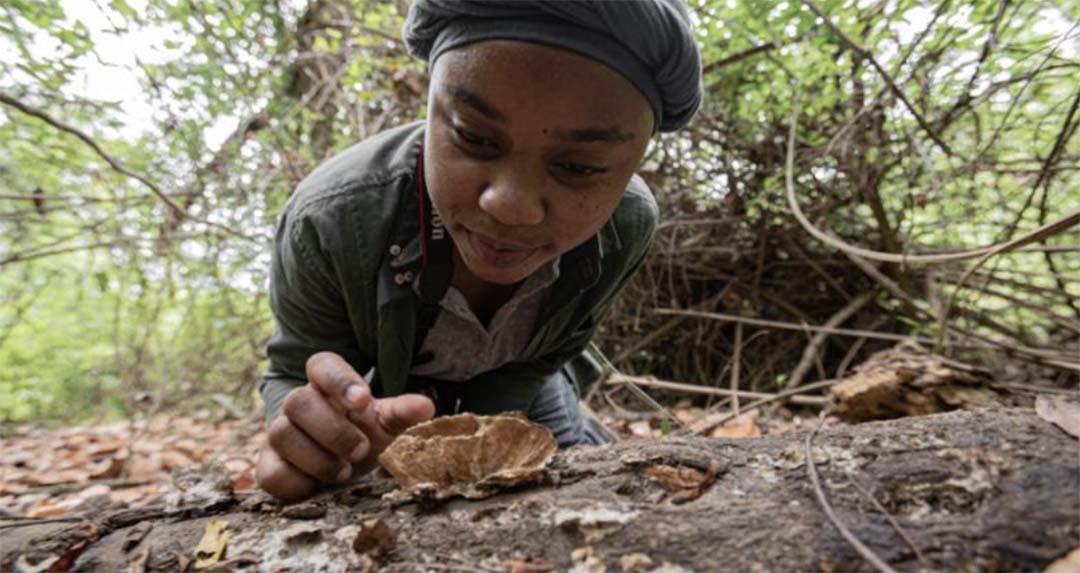 António Ngovene in the field collecting data in a seed trap. 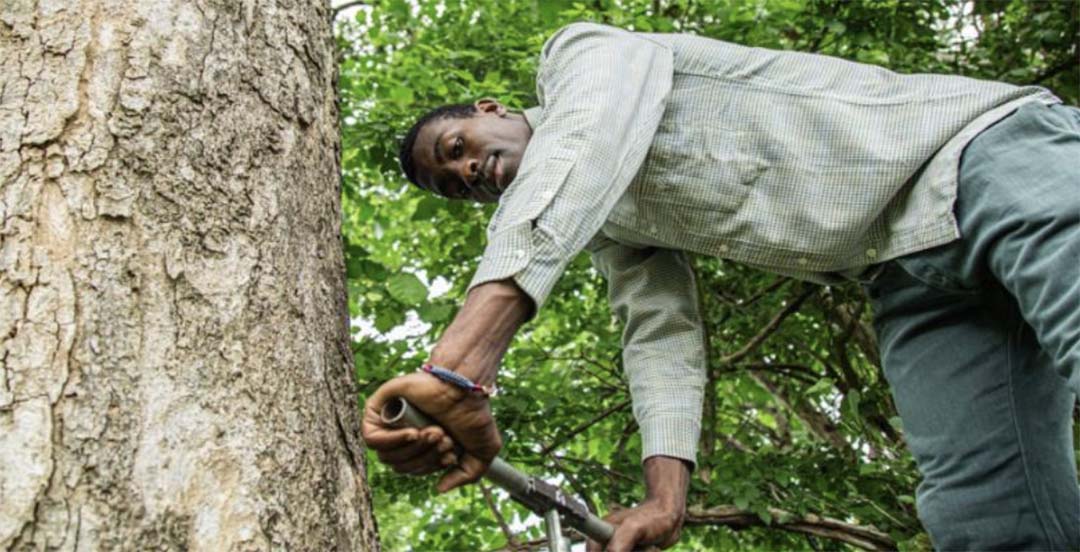 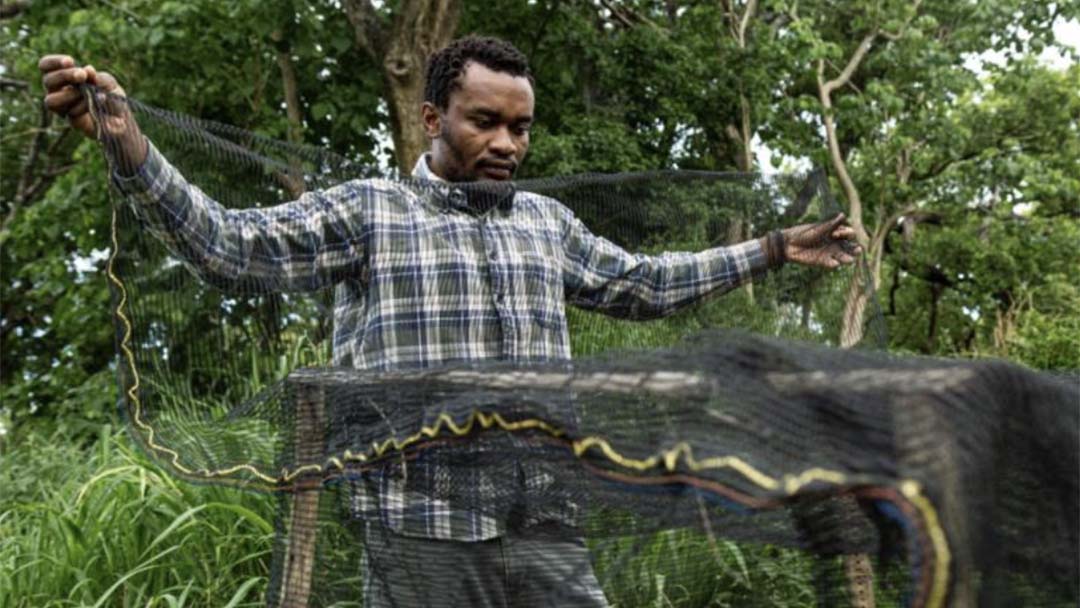 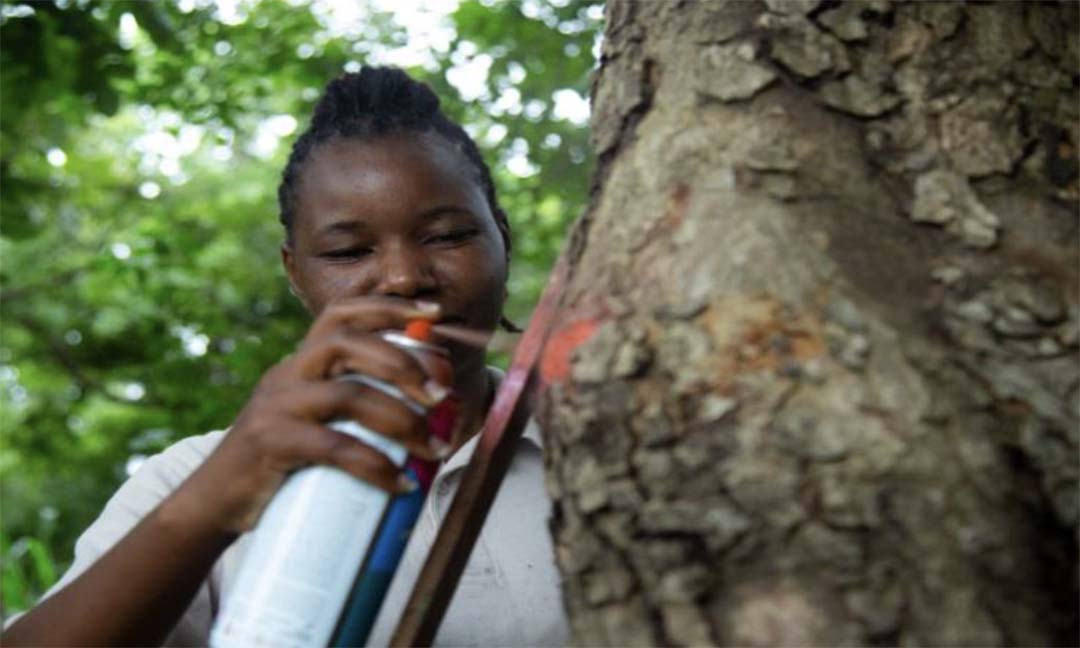 Clotilde Nhancale in the field marking the diameter of a tree trunk.