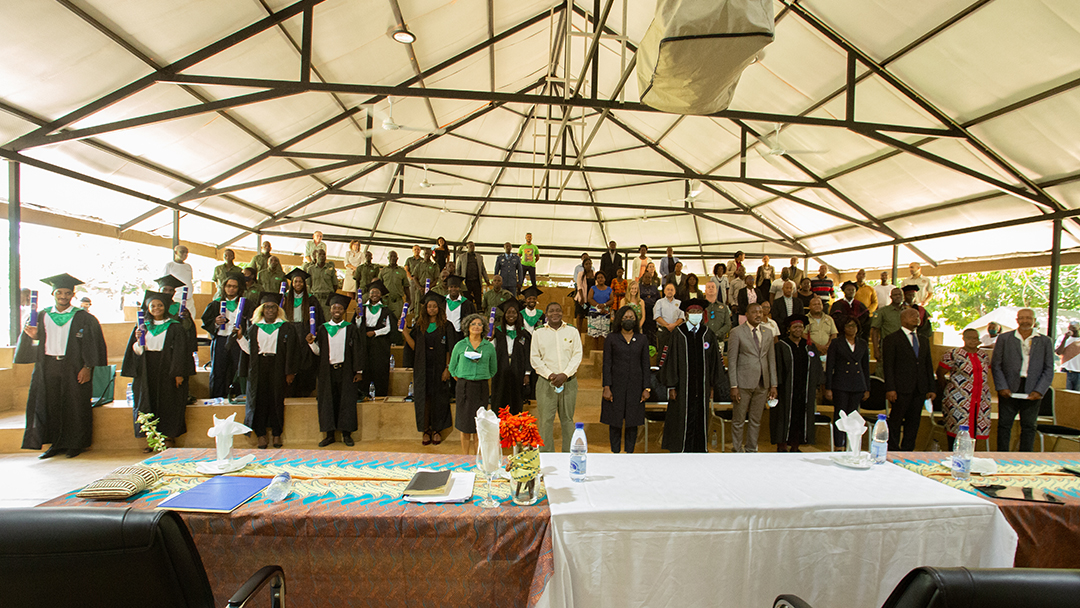 In the center is the Vice-Rector from UniLurio, the Park’s Warden, the Secretary of State, the rector of UniZambeze and the Administrator of the District of Gorongosa. In addition to the new Masters in Conservation Biology graduates, representatives of the “BioEducation” Consortium can also be seen in the photo above.

The Master’s program was developed by a consortium of three Mozambican institutions of higher learning (Universidade Zambeze, Universidade Lúrio, and Instituto Superior Politécnico de Manica) in partnership with the University of Lisbon of Portugal and Gorongosa National Park as part of its BioEducation Program. The Master’s program is supported by the U.S. Foundation: “HHMI” (Howard Hughes Medical Institute) and by the Institutional Development Fund.

The Secretary of State at the Province of Sofala, the Rector of UniZambeze, the Vice-rector of UniLúrio and the Adjunct Director of ISPM participated in the ceremony. Representatives of the local government, including the Administrator of the District of Gorongosa, members of the Bio-Education Consortium, community leaders, friends and family of the students also attended.

This master’s program is run entirely inside the Gorongosa National Park, and it provides training in conservation biology, ecology and environmental management. Students have the opportunity to apply the knowledge gained in their courses to hands-on research projects in the field for their final dissertations. They enjoy a full tuition scholarship funded by HHMI that also pays for their living expenses. 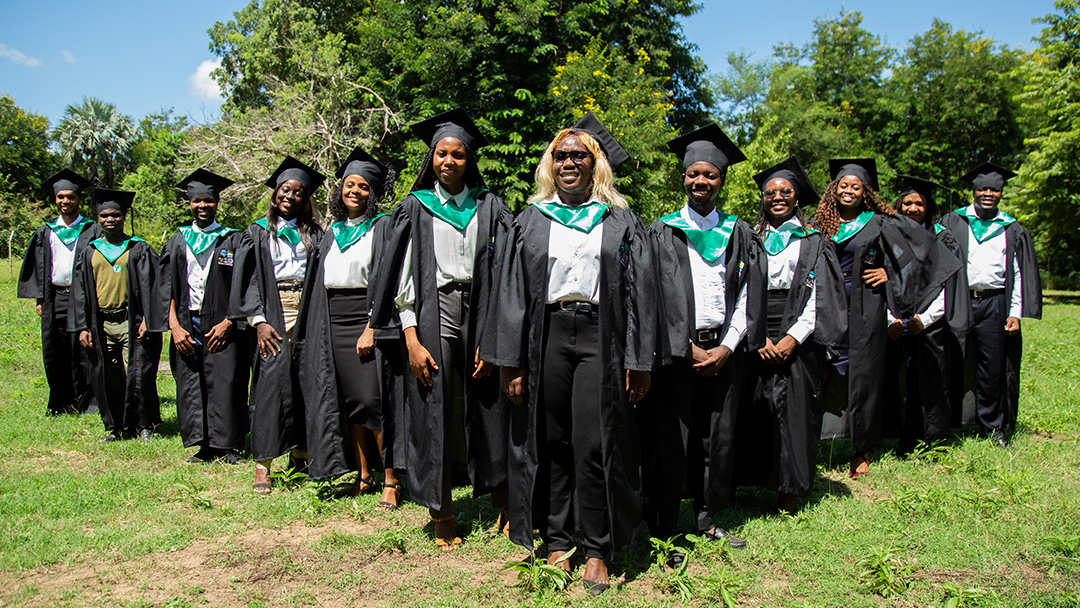 Gorongosa Park is delighted to congratulate this second group of students for their dedication, and we are confident they will advance the goals of conservation in Mozambique and abroad. These graduates will now apply their newly acquired knowledge and skills in different fields. Most already have jobs or internships in conservation. One student, Beto Soares Tenente was hired by Gorongosa National Park to work as a lab technician for the Pringle Laboratory in Gorongosa (Princeton University affiliation). Four students have internships with BioFund; one is a ranger in Quirimbas National Park. Isildo Nganhane, who earned the award for best student, is a lecturer at UniLúrio and will continue his work. Other students are looking for PhD opportunities. All hope to contribute to conservation areas thoughout Mozambique, integrating community development and conservation, as they learned to do in Gorongosa.

We are pleased to announce the third cohort of twelve students will begin their studies next week. Just like this last group, students are from all regions of Mozambique, and females are well represented.

About the Gorongosa Project and its science education programs

The Gorongosa Project seeks to integrate conservation and human development with the understanding that a healthy ecosystem will benefit humans, who in turn will be motivated to support the objectives of Gorongosa National Park.

Scientific research is an integral part of the long-term plan for the restoration of the Gorongosa ecosystem, because an in-depth knowledge of the Gorongosa ecosystem will help the Park’s management make better decisions about its conservation. The E.O. Biodiversity Laboratory Wilson opened in March 2014, positioning Gorongosa as one of the most advanced research centers in southern Africa. The Laboratory attracts national, regional and international attention. Scientists from different institutions gave been doing research in the Park, including researchers from the Universities Eduardo Mondlane and Lúrio in Mozambique, the Universities of Coimbra and Lisbon in Portugal, the University of Oxford in England and Harvard and Princeton Universities in the USA.

One of the most important roles of the Laboratory is to provide training for the next generation of Mozambican scientists in the Park and to prepare them for university studies in order to obtain advanced degrees. Some young people from communities neighboring the Park (or from technical schools in the central region), who receive total or partial financial assistance from the Laboratory, are studying at universities and high schools for future careers as veterinarians, ecologists and laboratory technicians.

For more information about our program or to schedule an interview with someone involved in the program, please contact Vasco Galante by WhatsApp (+258 82 297 0010) or email (vasco@gorongosa.net).